I've always been fascinated by the intricate geometric tile patterns, called Zellij which are an important hallmark in Islamic art and architecture (since the 10th century!) Whenever I visit an ancient mosque or palace I gaze up at the ceiling and I'm in awe at the beauty of these perfectly symmetrical patterns that seem to go on forever.

Did you know that these interlocking patterns are a representation of our universe, and how we are all interconnected like the stars? Islamic art and heritage is our inspiration at Artizara, so I thought I'd discover more about the story behind the art of Zellij. Here goes..

Zellīj is a style of tile work made from individually hand-chiseled tile pieces set into a plaster base.The pieces were typically of different colors and fitted together to form complex geometric designs, such as radiating star patterns.

This follows the conceptual framework of Islamic art, which values the creation of spatial decorations that avoid depictions of living things, consistent with taboos on such depictions in religious settings. The word "zillīj" (زليج) is derived from the verb "zalaja" meaning "to slide". The word azulejo in Spanish and Portugese derives from the word "zillīj". This form of  Islamic art is one of the hallmarks of Moroccan and ancient Moorish architecture. Zellij became a standard decorative element along lower walls, in fountains and pools, and for the paving of entire floors. It is found commonly in historic buildings throughout the region, as well as in modern buildings making use of traditional designs such as the Hassan II Mosque in Casablanca, which adds a new color palette with traditional designs. It is pretty amazing to recognize just how much mathematical genius was required to cover the walls, ceilings and floors of buildings of monumental proportions with such perfectly symmetrical artistry.

The more complex zellij style that we know today became widespread by the 14th century during the Marinid, Nasrid, and Zayyanid dynasty periods in Morocco and Algeriaa, al-Andalus, and the wider Maghreb. It may have been inspired or derived from Byzantine mosaics and then adapted by Muslim craftsmen for faience tiles. These are evident in famous buildings of the period such as the Alhambra palaces of the Nasrids.  By this period more colors were used such as yellow, blues, and a dark brown color. Geometric patterns and other motifs of increasing complexity were formed this way. 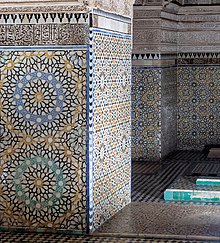 Over time,  the complexity of geometric patterns increased in part through the use of even finer (thinner) mosaic pieces for some compositions. The zellij compositions in the Saadian Tombs are considered one of the best examples of this type. Red pigment was added in the 17th century.

The old enamels with the natural colors were used until the beginning of the 20th century and the colors had probably not evolved much since the period of Marinids. The cities of Fes and Meknes in Morocco, remain the centers of this art. Over time, Zellij patterns have been used to decorate everything from wood work and metal work, to jewelry, pottery and fabrics.

The art of Zellij is magical indeed and poses this important question: Isn't it beautiful how the smallest of pieces are an important part of the great puzzle that is the whole and even with one small missing piece the great puzzle remains incomplete? Such is our world, I'd like to think. Wherever and whoever we may be, we are all interconnected, together forming the great masterpiece that is our universe, like the infinite stars of Zellij.

Back to Artizara Blog
}